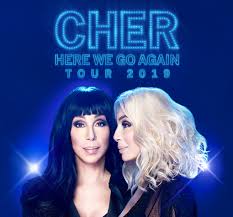 This past Wednesday, I went to the Cher Concert at The AT & T Center. I’m not much for concerts, as I was a radio DJ for 23 years and went to a lot of shows for free. It was the concert promoter’s way of promoting the concert; I’d promote the show on air and then review afterwards. The price of tickets and the whole concert experience doesn’t attract me. I’m always amazed at the price of parking, the taxes, the $4.00 for a cup of water, $17 for a tasteless small pizza. I’d rather buy the album forever and enjoy listening to it in my pajamas. I’m also the one that sits next to the sloppy drinker, the one behind that big hair, who likes to stand during the show. And it irritates me that people have to have their cellphones on constantly taking pictures and taping everything, for God’s sake, be in the moment and record it in your mind. Plus, I like to leave before the end to beat the traffic; so no longer am I the “Concert Queen” of yesteryear.

But when an icon comes to town, I’m willing to put away my Eeyore frame of mind and give it a go. So we got tickets in the nose bleed section, I mean who really pays $1000 to sit up close?

Maybe it’s just me, but climbing up all those tiny steps and walking on an inch of concrete sideways as I shuffle past others in my row, makes me nervous. I’m surprised that nobody falls; much like I’m amazed nobody falls into the river down at the San Antonio River Walk.

Of course, the woman who sat next to me was loaded down with 5 beers for the show, spilling much of it on me without hesitation or concern. “Curses” I thought and then noticed the woman in front of me was saying it was her first time seeing Cher and how excited she was. It’s moments like this that I know that I’m being taught a lesson, focus on the light, the positive. I started talking to the new Cher concertgoer and was delighted in her excitement, it made me even more excited.

The concert started, Opening act was Nile Rogers and his band, then Cher who was amazing. Was she singing along to a backing track? Who cares? she’s 73 years old, looks amazing and is a true entertainer. She asked the audience coyly “What’s your Grandmother doing tonight?” She encouraged us to do whatever it is that we want to do, dye our hair blue, wear outrageous outfits, whatever, just do it. I thought, yes, again I felt another lesson. What is it that I want to do, but am not doing? To this, I already know the answer, so now there’s a new something on my horizon.

My reaction to my concert experience:

Nile Rogers and his band were the opening act, a soulful, funky, R & B, disco, dance performance that blew me away. Nile wrote such great hits as “We Are Family” “I’m Coming Out” ~ He produced David Bowie’s “Let’s Dance” and Madonna’s  “Like a Virgin” albums, he’s a giant songwriter, composer, producer, guitarist, you could look him up.
As he talked about all of his success about songwriting, I instantly thought “Curses” how did he get there? And then I had to laugh at my self-centered envy, which then made me switch to being awed by his talents. Talent though is only part of it; it takes practice, practice, practice and then being in the right place at the right time. It takes being awake and aware and it takes an incredible amount of courage to offer up your authentic self for approval or rejection. So, in the end, I kinda fell in love with him and his band. Was touched that he shared that he has survived cancer twice and pulled the audience into using our cellphones as lights to represent the stars in heaven. It was pretty cool.

Then the light came on and we waited for Cher.

Then the lights went off and there she was, beautiful, stunning, like age had passed her by.

She sang, she talked, she had dancers, acrobats, an incredible band, I was taken back to when I first heard her on the radio, to the time of The Sonny & Cher TV show. We sang along, stomped our feet, cheered and clapped, she held us in the palm of her hand.

My reaction to her performance:

It made me think back on all the decisions I’ve made as a musician, singer, and performer. The missed opportunities, the bad choices, the wrong directions, the time when I turned down a chance to tour in Russia in favor of what at the time I thought was love. The choice not to head to Nashville and give it a shot, the idea that I could make what I wanted to happen, happen upon the ground I stood.  How my mother impressed upon me the dangers of the “casting couch” and how I obeyed.

It made me shake my head at my songwriting, my singing, my choice to be a solo artist and the many times, I’ve said no to a band.

Something Cher, shared stuck with me. She said that she’s never made it into any of the “groups”. She said that the music industry doesn’t consider her a singer, the acting community doesn’t think she’s an actress, that she feels like she’s never been invited “inside” the club.

Good enough to present the artist, but never being the one presented. How did they get there, where is the path, what’s the code of entry, what is the difference between them and me? What do they know that I don’t and if you do, would you share it? If you would share, do you envy those who have “made it?”

I have my suspicious that every musician feels pangs of envy and a touch of jealousy when they watch those who’ve made it. Those who can fill a stadium, their bank accounts and their dreams. Perhaps, everyone wants the dream, wants to reach the top. For now, I will be grateful that I could reach the top of The AT & T Center seating section to watch Cher, to cheer her on, to be part of a magical evening.

Today’s Musing: “Climb every mountain, Ford every stream,Follow every rainbow ‘Till you find your dream”
Climb Every Mountain from The Sound Of Music

I know who you are, I know what you do, this Ben Franklin is just for you.