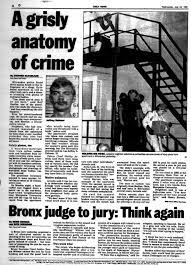 I feel compelled to share my experience with his story.

I’m from Cuyahoga Falls, Ohio; my late uncle Gene owned a 6 and one half-acre cabin in Bath Township, Ohio.
Jeffery Dahmer is around my age – his home was in Bath Township.

As a kid, I loved “The Cabin” it was a place we’d all go to on weekends for family gatherings. Woods to roam for what seemed forever, an Outhouse that vexed some of us. It was nature, it was beautiful and for most of my childhood it was ours.

My Uncle Gene decided to buy us all a rabbit, several rabbits what he put in a big open pen located pretty close to The Cabin. Super excited were we, as we picked our rabbits and gave them all names.

One morning we went out to see them. All of them dead, someone had snapped their necks.
It wasn’t an animal on 4 legs, it was a monster on two.

We didn’t talk much about it, not that I remember.

But I remember the feeling at times, while I was merrily riding the riding lawnmower, the feeling of being watched.
It felt creepy then, feels creepy now as I remember.

Time moved on
I grew up
I got a job in Akron, Ohio at a Radio station (WKDD)
I went from Traffic Reporter to Morning Sidekick/News so fast, my head was spinning.

One day, another news guy was reading the Associated Press breaking news of a serial killer caught in Milwaukee.
He had not only murdered 17 men, but also ate parts of their bodies and keep other parts as souvenirs.

His next words; “Bet he’s from Ohio, all the crazies are from here.”

Turned out Jeffery Dahmer was from Ohio, Bath Township.

Suddenly the vision of those murdered rabbits came to mind.

As I was the News Reporter for the #1 Station in town, I was required to attend several press briefings concerning the case.
With my trusty tape recorder was part of the press that went to the Dahmer House, saw the crawlspace where he hid his first
victim (Steven Hicks – 1978)

I met the victims’ parents, who were begging to have their sons remains returned to them so they could put him, finally to rest.
(The Summit County coroner refused to release them, as they were evidence.)

Before the press conference, the media was instructed that in the event that the victims parents broke down, we were to turn
off all recording equipment, out of respect. When Mrs. Hicks began sobbing, I quietly turned off my recorder, such incredible pain.
I was the ONLY reporter who stopped recording, the camera men were rushing forward to get closer shots. I hated the whole experience.

It was a terrible story unfolding before the nation. I was on several major networks reporting on the local angle.

There’s much more to the Dahmer story, if you’re interested watch the mini-series on Netflix. It’s dark, disturbing and unsettling.

No one I know wants to watch it, I think it freaks them out that I’m so aware of Dahmer’s life, but it’s also part of mine.

It’s an important story of Racism, Poverty, Injustice, and Police Neglect…things we are still dealing with 30 years later.

The one thing covering the story revealed to me is that I simply don’t have the stomach for hard news.
The voice telling listeners about human tragedy,

I covered Operation Desert Storm and felt like a mouthpiece for whatever, whoever was telling us what to tell everyone else.
News is no longer “news” as I have known it.
It’s all about ratings, about diverting our attention to whatever the puppet masters want us to think about.

Well, it seems that was all that I wanted to share.
Take gentle care and thanks for reading.
#girlwithguitar