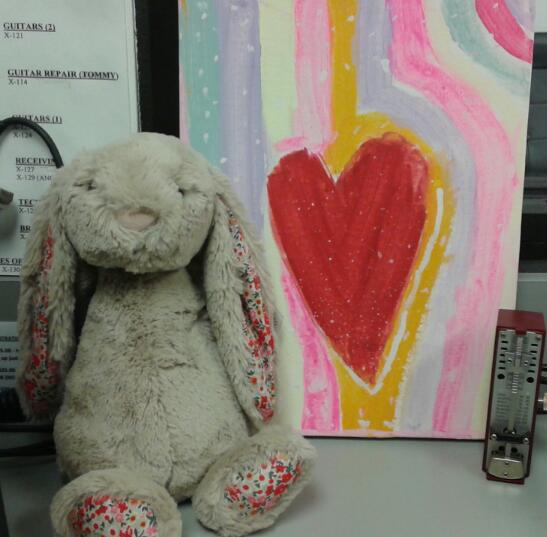 This morning, I taught a ukulele lesson to my 86 year old student, we played “For The Good Times”, “What A Wonderful World” and “San Antonio Rose.” He asked me about how music is written, what makes up a chord, as I explained his eyes glazed over, his response was, “Wow, that’s hard.” I agreed, as he is in his 80’s and it’s much like learning a new language. Then we worked on chord changes, strumming, singing and somehow got off topic…

We started talking about how kids behave in school, we’re both in astonishment at how disrespectful students are in the classroom. I told him about one of my students who actually brags about being rude to his teachers. When I told my young student about being paddled by teachers, he was stunned, stating that he would never allow a teacher to paddle him. I told him that back then, it wasn’t an option.

I was one of those kids who had a difficult time sitting still, always looking out the window, chaotic desk, homework messy. My teachers thought I’d be like my two older sisters, quiet and studious, I wasn’t. I remember lying to my music teacher, claiming that I was Jewish, so I didn’t have to sing the Christmas songs, she let me slide for years  and then in 6th grade gave me the lead in the Christmas musical, it traumatized my 10 year old self. I don’t know where my head was, but obviously not squarely upon my shoulders. My name would be called out in class…”Curtiss!!!” and out into the hall I would go, head bowed, knees weak, followed by the teacher with that dreaded paddle. In Kindergarten, the teacher pinned a note to my shirt, informing my mom that I was bad and the humiliation of wearing that note all day, kept me in line on future school days.

My father left when I was 5 years old, my mother worked hard to keep food on the table and the lights on, I rebelled out of being angry. The other kid’s moms were stay at home moms; my mom was tired a lot. I found an outlet in sports, it allowed me to be aggressive within an acceptable boundary and provided me with the attention that my young heart yearned for. Day after day, hour after hour, I’d practice my basketball shots, bat swings, sliding, diving, winning, always winning.

My grades weren’t good, despite a country wide test in the 2ndgrade that stated that I had an extremely high IQ. In retrospect, I don’t think it mattered to me. On the last day of Grade School, my teacher forgot to fill in my report card, so my `12 year old self filled it in, giving myself outstanding grades, yards of improvement over the previous grades. My mother was so proud that she took us to The International House Of Pancakes, IHOP and showed my report card to everyone, she even bought me a huge sucker, oh what a treat for my conniving self!

When I was bad at home, my mother had a special paddle made for me, she never used it, but nevertheless, there it hung on the kitchen wall, a constant reminder. I was afraid of being bad, getting paddled, having my “things” taken away, of being grounded, of disappointing her, it mattered.

So what happened, when did kids stop being afraid of consequences? My older student today said he thinks it all started to change in the 1960’s. When Television brought the Vietnam War into our homes, when “Free Love”, “Peace Man” and “Groovy” became household words.

I felt the world change when I was 15 years old, making it 1974. We used to leave our front door open at night, with just the screen door locked; I used to jog without fear in the twilight. Watergate reigned, President Richard Nixon was impeached, and Gerald Ford stumbled in his footsteps. I sang along to Joni Mitchell, John Denver and Gladys Knight and The Pips on the car radio. The average yearly income was $13,900, a gallon of milk was $1.39 a gallon and gas was .53 cents. All In The Family and M*A*S*H, blared from our little back and white TV with the tin foiled rabbit ears. I remember my sister’s boyfriend praying that his numbers weren’t called in the Vietnam Lottery, Good Bless our Veterans. My reading interests ranged from Mad Magazine to The Fabulous Furry Freak Brothers, I’m still a huge R. Crumb Comics fan

Seems there was a time when we knew wrong from right, treated each other differently than today. The focus seems to be so much on the, “What’s in it for me?” attitude that we’ve lost altitude as a people. Doing the right thing keeps me on the right path and in the light is where I want to be, awake and aware, always trying to be my best self. I fail so often on life’s road of speed bumps, taking a wrong turn here and there, weaving, speeding, forgetting my turn signal, cutting someone off, but it’s the trying that matters.

How can we reboot society? Clear the hard drive, remove our cookies, reset our security, remember our passwords, the words of encouragement and kindness? If history repeats itself, I hope we find ourselves repeating a time when respect reigned and kindness was King.

Today’s Musing: “Man is still the most extraordinary computer of all” ~ John F. Kennedy