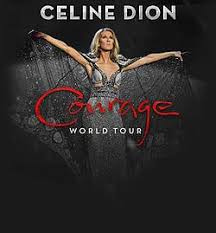 Last night thousands of us witnessed magic at The San Antonio, AT & T Center. We went on an emotional rollercoaster ride on the wings of Celine Dion. The result, I feel changed, drained and emotionally rearranged.

Recently, I’ve started going to concerts again, giving way to my struggle with paying for things that used to be free during my radio days. Over the years, I’ve seen a lot of shows, so now I’m more selective as driving after dark has become like an Olympic event.

Ticket prices make it next to impossible to attend, my philosophy: Buy the CD, stay in my pajamas, forget the make-up, settle in and enjoy. However, there’s nothing like sharing space with thousands of strangers, each with their cellphones whirling and twirling, cheering, chanting and tearing a live performance.

What’s a girl to do? Buy the cheapest seats possible, of course. Who has $900.00 to have a front row seat? And those expensive floor seats usually require one to stand the entire time in order to see over, around or under the crazed fan in front of you. The cheaper priced tickets do have a higher emotional and physical price, as climbing to the upper level requires the balancing act of the “Flying Wallendas” ~ (a circus act and daredevil stunt performers, most known for performing high wire acts without a safety net).

In my last Musing, I wrote about great singers ~ the ones who touch my heart, make the hair on my arms stand at attention. Celine Dion is top of my list for several reasons, her wins, losses, authenticity, human compassion, her voice, Oh that voice! Last night’s performance left me stunned, speechless and inspired, as if gifted with a brief admittance onto a level of magic so grand, so above the beyond, that re-entering the earth’s gravity is difficult. It’s seldom that we sit in brilliance, bask in the glow of greatness, it somehow made the world right again, the knowing that she is among us. It short, I have a Girl Crush on Celine, much as those who shared the evening with her last night. Her band was tight, I especially enjoyed her rhythm guitarist who wore an Irish Kilt and at times played a purple guitar.

I was surprised to see video of her ballet dancing, which explained her amazing physique, not an ounce of body fat, muscles taunt, radiating power from head to toe. She moves like a 20 year finely tuned athlete, not a 51-year-old mother of 3, a woman who lost her husband and brother only 2 days apart in 2016. She took up ballet the last year of her 10-year stint in Vegas; she does her shows and then heads off to do ballet for hours. There has been concern about her being too thin, as a woman, I wonder, is there such a thing? (Seriously, she says she is in the best health of her life, mentally, physically and spiritually.)

We waited 45 minutes for the show to start, then the lights dimmed, the applause built into a maddening crescendo as thousands of us sat on the edge of our seats, eager as pigs at a trough. The music started and out she came, red dress, slit up the side, smiles, all smiles ~ so seemly humbled by our outpouring of love. I can’t remember ever seeing a performer command the stage in such a way; it felt like she was reaching out to everyone, to me and saying “Thank you” for being here, for always being here.

Using borrowed binoculars, I watched intensely as she used her entire body, every cell to conjure up a vocal tapestry of perfection. She sang old songs, new ones, covers of artist such as Prince, Queen, and Patti LeBelle, ending the night with John Lennon’s “Imagine” which brought us all together as if in silent prayer.

Her tour is called: “Celine Dion 2020 Courage World Tour” promoting her first American Album without the gentle guidance of her late husband, she says she’s finally The Boss, which was apparent during her command performance.

Thank you Celine, for lifting us from the floor to the ceiling with grace and elegance.

I know who you are, I know what you do, this Ben Franklin is just for you.

How To Find A Good Teacher (Call me ~ Ego aside, read on)