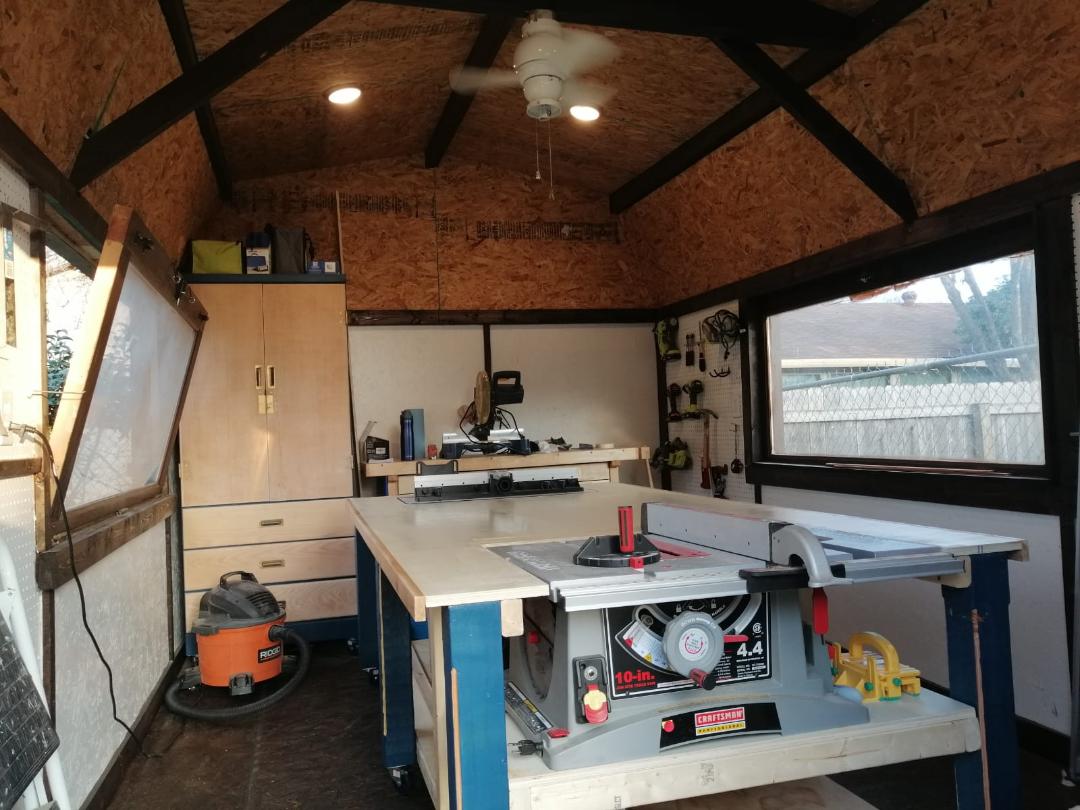 She likes to make things, sees what’s broken and imagines something whole; one man’s trash is another woman’s treasure.
Moving the cars out of the garage, pulling everything into place, sawdust, nails, the drilling, pounding, the gentle stroke of a paintbrush, her own private symphony. After years of having a makeshift workspace and displacing the cars, she finally has “The She Shed”, a place of her own to work her wizardry.

I’ve been watching it being put together for weeks, the remaking of a huge shed just outside my music studio, it used to be filled with things, which were moved to another shed, which I suspect will soon be claimed as her secondary “She Shed” ~ only time will tell.

“The She Shed” is big, yellow and unattractive from the outside, but here in San Antonio, space is precious as she flirts with the promise of additional storage space, that flirtation has finally come to an end. Up north, my homeland, we have basements to fill with our precious memories, but not here, due to limestone. It entertains and amazes me to look upon open garage doors to witness stacks and boxes from floor to ceiling, let the cars sit outside, let things we haven’t used in years fill the space.

Before “The She Shed”, she made sliding barn doors out of crates, tables out of doors, shelves out of wood and pipes, used old fencing to line the walls of my studio. I wonder what, oh what shall be created now that “The She Shed” has entered her world. “The She Shed” continues to grow, being filled with a Table Saw, new drills, a thing that catches saw dust, the list goes on and on, it’s like a surgeon with operating tools.

She tries to repurpose everything; the doors that use to be in our house are now windows, the eyes of “The She Shed.” She found an old cabinet, restored it into something cool to hold things. Things that pull, things that punch, things pick, things that pry, so many things, My Oh My!

The walls are lined with new tools, I ask who needs so many tools, She replies, “I do” If I disagree, she asks, “How many guitars do you have”, bringing an abrupt end to the conversation.

One night, she asked if I was too tired to help her get an old something that someone was throwing away, off we went in our pajamas, like thieves in the night, grunting as we lifted it from their curb into her car, back to the house. She had an idea for it, fixed it, decided it wasn’t what she intended, broke it apart and is reusing the wood to make something else.

She’s going to make a cat litter box, I say the space is too small, she says it isn’t, out comes the measuring tape, she’s right, I’m wrong, when will I ever learn? She asks my opinion on things; I give it, and then does what she wants. Used to be that if I disagreed, she’d consider altering her plan, but that was before. Something changed and she found her inner strength to trust herself, after all what do I know about such things?

I love watching “The She Shed” and She; they seem to hum a strange song of something special. They both seem to come to life within feet of each other, it’s like watching a painter and their blank canvas, a conductor with his symphony, A maternity ward when birth is given, each creation a wonderment.

Today’s Musing: “Let your imagination be your canvas, oh the places you shall go” ~ Katrina Curtiss