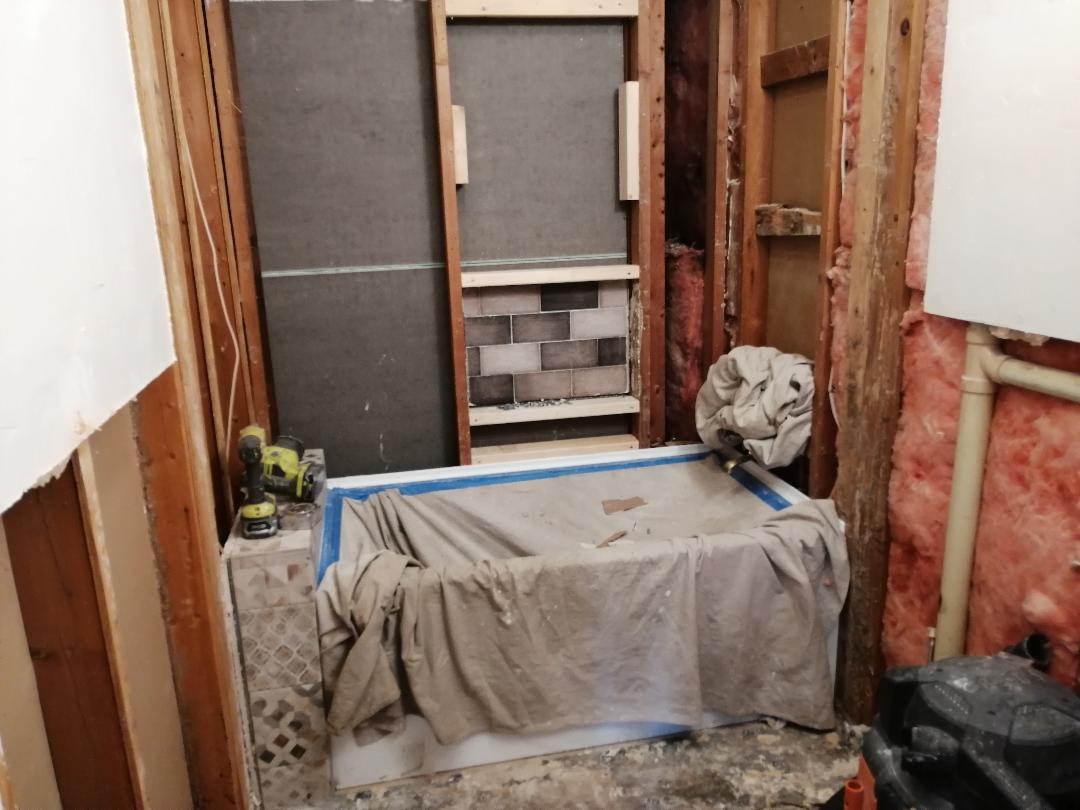 My bathroom has been stripped so many times, it wants its own Dancers Pole

This is an update for previous Musing: https://musings.katrinacurtissmusic.com/2020/03/remodeling-remorse/

On Monday, March 9th, 2020 the guy who was remodeling the guest bathroom was scheduled to arrive in the morning so that we could discuss our concerns. He texted, the morning of our appointment, stating that he was driving, it was raining, so he had to cancel. Limbo Land was my home for the previous 2 weeks during the remodeling, since he had to finish another job, limbo land was becoming very familiar. (btw ~ what he calls rain, most of us call drizzle)

During those 2 weeks, it was revealed that the job he was doing was subpar and completely unacceptable, it was embarrassingly bad. Armed with information as to how to solve the issues, I cleared my Monday morning schedule, to have a serious, educated talk with him, to work together to find solutions. To be honest, I have stressed a lot about speaking to him; after all, I’m just a simple woman, I’m well aware of what I don’t know.

What happened next was a series of text messages. I replied to his text, that I was very disappointed that he was canceling our appointment. I dislike texting, but felt I needed a record of our conversation, so I included my concerns about needed addressed before moving forward.
*He did not use Cement Backer Board on the walls prior to putting up tile ~ this means if there were any cracks in the tile, or spaces that water could enter, the future would involve major issued.
*The floors were not prepared correctly (there was no water barrier, the adhesive was done incorrectly, the tile wasn’t sticking to the existing adhesive, spacers were not used, the tile was cut badly).
*The inset into the wall, slanted backwards and was a water trap.

His response still has me amazed and incredibly disappointed.
He stated that since I had “so many concerns that perhaps, we should be done.
That he should have charged more for the project, but “hey what did he know?” Stating that he didn’t want to waste his time or ours.
My silent reaction: “Sorry dude, but you’ve already eaten up a month and a half of my time, plus a couple thousand of my dollars, now in your pocket and another thousand now in the landfill.”

My actual response was short and sweet, that I accepted his decision to “just be done.” That a phone call would have been greatly appreciated, and I would proceed forward and hire a professional to finish the job. He responded, “Wow” to which I responded, “Wow indeed!”

After talking with professionals, I agree with their assessment that he knew he was doing a bad job and wanted out.
Out he was, but now who was in?

Where to go, where to turn?

I hopped on Home Advisor (https://www.homeadvisor.com/?gclid=CjwKCAjwmKLzBRBeEiwACCVihjek9c4E0RH6U0hVUjfCIQaLlQIEBp-hQsEjGY7SOxfU3LSprXLYaRoCvLMQAvD_BwE)

Entered my info and got an immediate response from “OCONNELL ~ Custom Kitchen & Bath Remodeling, all Renovations” ~ my phone rang, it was the owner, he asked what was needed, I told him a bit of the story, he came over within 15 minutes to take a look and give me an estimate.

What struck me most was his reaction to the previous work, he said that Cement Backer board needed to be put on the walls prior to tiling, was it? ~ no
He took a look at the floor, picking up the loose tile, not needing to ask if they had been prepared, the obvious answer ~ no

He was indignant, stating that work like this is why people hate having contractors in their homes. It’s why you hear horror stories, it gives their livelihood a bad name.

It was refreshing and frightening at the same time.

He quoted a price, I sighed ~ “so everything needs taken out, trashed and redone?”
He sighed, “Yes, if you want it done properly”
When can you start? ~ To which he replied, “tomorrow morning around 9:30” to which I replied, “I’ll have coffee ready, see you tomorrow.”

So we are now officially in Day One of a project that has taken over 6 weeks, a project that should have been done within two weeks. My new guys says he might be able to be finished this Monday ~ yippee!!

The new guy and his helper pointed out that we have termites, we called out the termite guys, so now I also have a new termite guy.

I’m now on a first name basis with the staff at the tile store, my neighbors are being entertained, my private music students are dealing with dust, my cat is confused.

So here we are again, dust in the air, work being done, tarps up to keep the mess at a minimum, two new guys trying to help out someone, that someone is me, who got taken advantage of by someone who should have known better.

Today’s Musing: “Who the HELL did this to your bathroom!!??” ~ my new Contractor