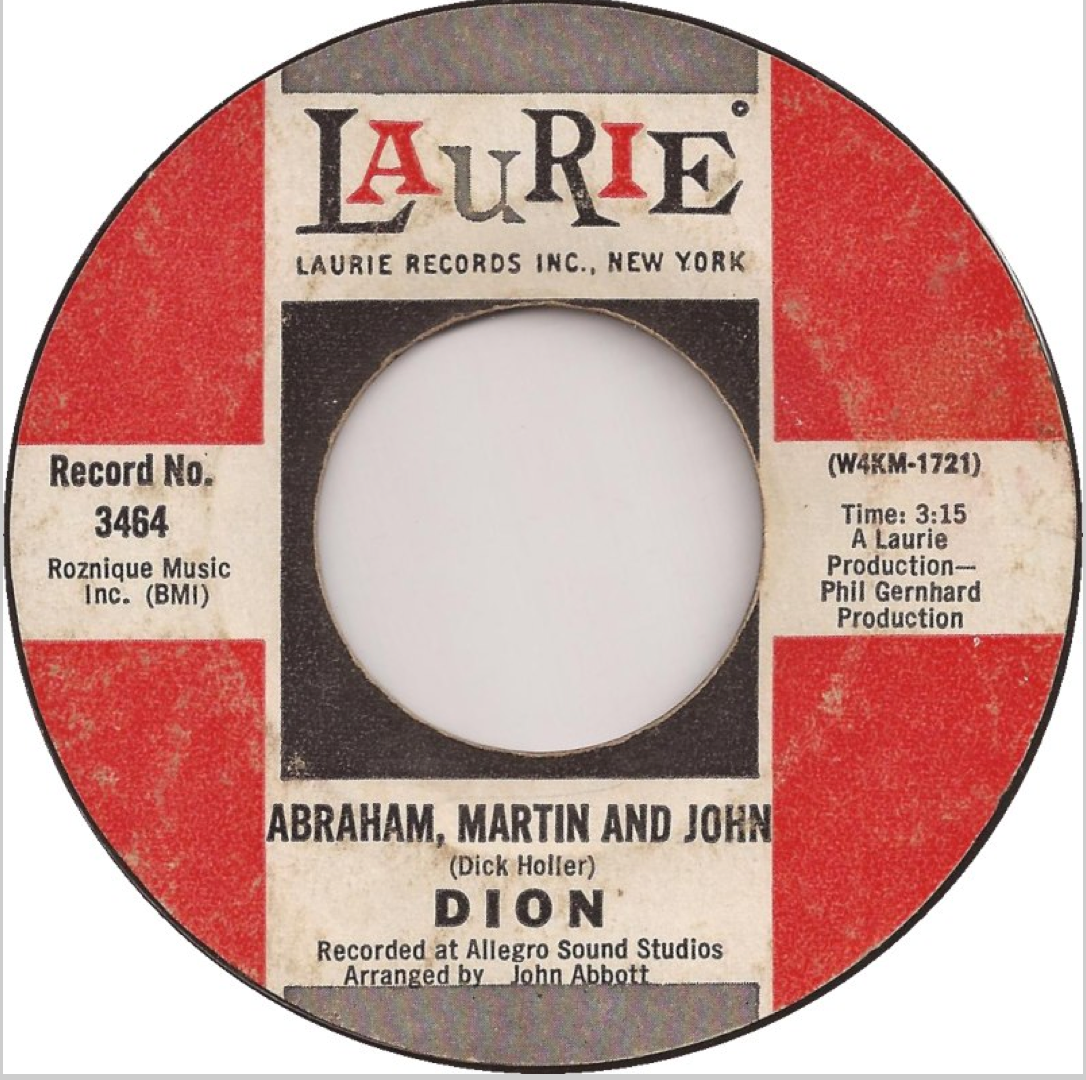 You hear them; you know them, like old friends that gently nudge you into an emotional realm. A song has incredible strength; it can change a person’s energy from high to low and everywhere in-between.

One of the first songs that touched me was, “Abraham, Martin and John” written by Dick Holler and recorded by Dion in 1968. I was walking down the street, just a kid, trying not to step on the cracks in the sidewalk, when I heard it playing on the radio. As I listened, my steps slowed and I felt a sadness descend upon my 9 year old shoulders and I didn’t know why. The song left me with a sense of bewilderment, which laid the pain of the worlds suffering at my doorstep.

Now, 52 years later, it still has the same effect.

The musical arrangement starts off slowly with a gentle English horn and violin, then sweeps the listener upwards with harps, bass, drums, organ and classical guitar. In essence, it’s a cornucopia of beautiful instruments dancing lightly and deeply into ones soul.

The lyrics tell a story, the tragedy of 4 men whose lives were senselessly cut short by the very same world they were trying to save. The song consists of 4 verses, the first 3 dedicated to those named in the title.

The first verse refers to President Abraham Lincoln who was assassinated April 15th1865. The second verse refers to the Reverend Martin Luther King Junior, assassinated on April 4th1968. The third verse is dedicated to the assassination of President John F. Kennedy, November 22nd1963. The 4th verse is dedicated to Robert “Bobby” Kennedy, John’s younger brother who walks over the hill with the 3 men, after his assassination on June 6th 1968.

According to several sources, The author, Dick Holler, wrote the song in the hours between the time Senator Robert F. Kennedy was shot early on the morning of June 5th and the time he died a day later. The song reflects the grief of a nation, left devastated by 3 assassinations in 5 years.

I try to imagine Dick Holler, sitting down with his grief, putting pen to paper and writing this song. He took us from 1865 to 1968 in 3 minutes and 15 seconds.

Here are the lyrics:

Has anybody here seen my old friend Abraham,
Can you tell me where he’s gone?
He freed a lotta people, but it seems the good die young
But I just looked around and he’s gone.

Has anybody here seen my old friend John,
Can you tell me where he’s gone?
He freed a lotta people, but it seems the good die young
But I just looked around and he’s gone.

Verse 3
Has anybody here seen my old friend Martin,
Can you tell me where he’s gone?
He freed a lotta people, but it seems the good die young
But I just looked around and he’s gone.

Didn’t you love the things they stood for?
Didn’t they try to find some good for you and me?
And we’ll be free,
Someday soon it’s gonna be one day.

Has anybody here seen my old friend Bobby,
Can you tell me where he’s gone?
I thought I saw him walkin’ up over the hill
With Abraham, Martin and John.

Note the way he starts each verse, He asks us, the listener if we’ve seen each man, whom he refers to as a “my old friend”

It creates a sense of intimacy between himself and the subject and triangulates the listener into their friendship.

His use of the words, “Has anybody here?” allows us a backseat in the sedan of the song. He then makes the same statement about each man, sharing his perspective of their life’s accomplishments in one succinct line “He freed alotta people, but it seems as though the good they die young.”

When he writes, that he “just looked around and he’s gone” ~ it brings home the immediacy of their deaths, the suddenness of their assassinations and his sadness.

The bridge is one of reflection, which binds the listener to the values of each man, the hope that they brought into the world, the promise of freedom. Leading us onto the path of light which each shed upon the world.

The 4th verse, the last is what inspired the song, the passing of his “old friend, Bobby.” The imagery of Robert Kennedy, joining the other 3 men as  they walk over the hill, out of our sight and lives, forever gone.

It’s this verse which leaves us to ponder what lies over the hill, gives us solace that in death, they are not alone, that somehow, somewhere, they are united in death as they were in life.

Here’s a link to the song: https://www.youtube.com/watch?v=a5hFMy4pTrs

Today’s Musing: “Write, just do it, be unafraid, there is no audience that matters outside of yourself” ~ Katrina Curtiss #girlwithguitar