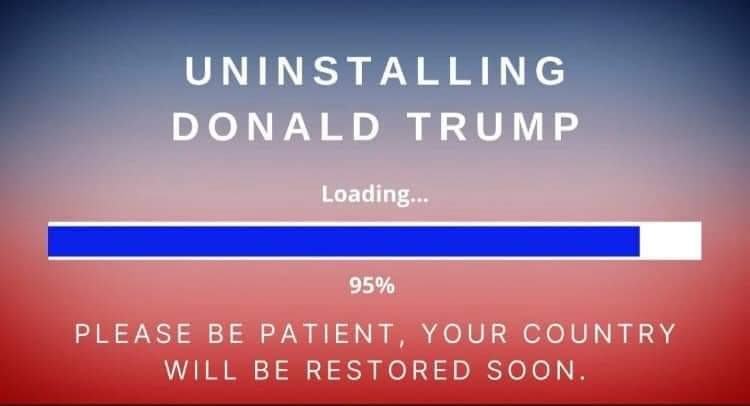 Are his supporters finally beginning to see who he really is?

TV stations literally had to cut away from Trump’s press conference last night because he was telling so many lies.

He is trying to drag our entire country down in his effort to stay in power; he is undermining the legitimacy of our electoral process.

He is inciting his people to chant “Count The Votes!” in Arizona, while his people in Philly are chanting: “Stop the Counting!”

He threatens lawsuits without any proof; there is NO proof of ballot tampering.
Therefore there is no case to be brought before any judge. As of now he is trying to make his case to the American people. Let us not forget he thinks we are too weak to handle the truth, may I remind you about COVID 19?

Last night two armed men were arrested as they allegedly planned to attack the Philadelphia convention center, where legal votes are being counted.

He thinks we as American’s are too stupid to understand our voting process, that mail in voting has been going on for years, that it takes time to count the votes, sadly there are those who believe him, sadly we’ve had to “believe” him for the past 4 years.

He told us, continues to tell us that COVID 19 is a hoax, that it will magically disappear, promised us it would after the election, stirred up the entire country with his false narrative, divided us, undermined us, damage us.

COVID 19 ~ In a way, he did keep his word about it “disappearing” during the election, as he throws his tantrums, we have taken our eye off the ball.

There is no way to sugarcoat the facts, the number of cases continue to climb as the virus sweeps through our country and Americans are suffering, but has he addressed this? Not a word my friends, because in the end, his concern has been for his survival, never once during his administration has he ever set a good example for us, NOT ONCE. (Note that yesterday Biden and Harris reportedly spent part of their day in meetings on how to deal with COVID 19.)

He will not go peacefully into the night, we can only hope that someone gets his ear and tells him how damaging his actions are for our country, a country that he wanted to “Make Great Again.” A country that he is embarrassing upon the world’s stage, all eyes are upon us my friends, have faith.