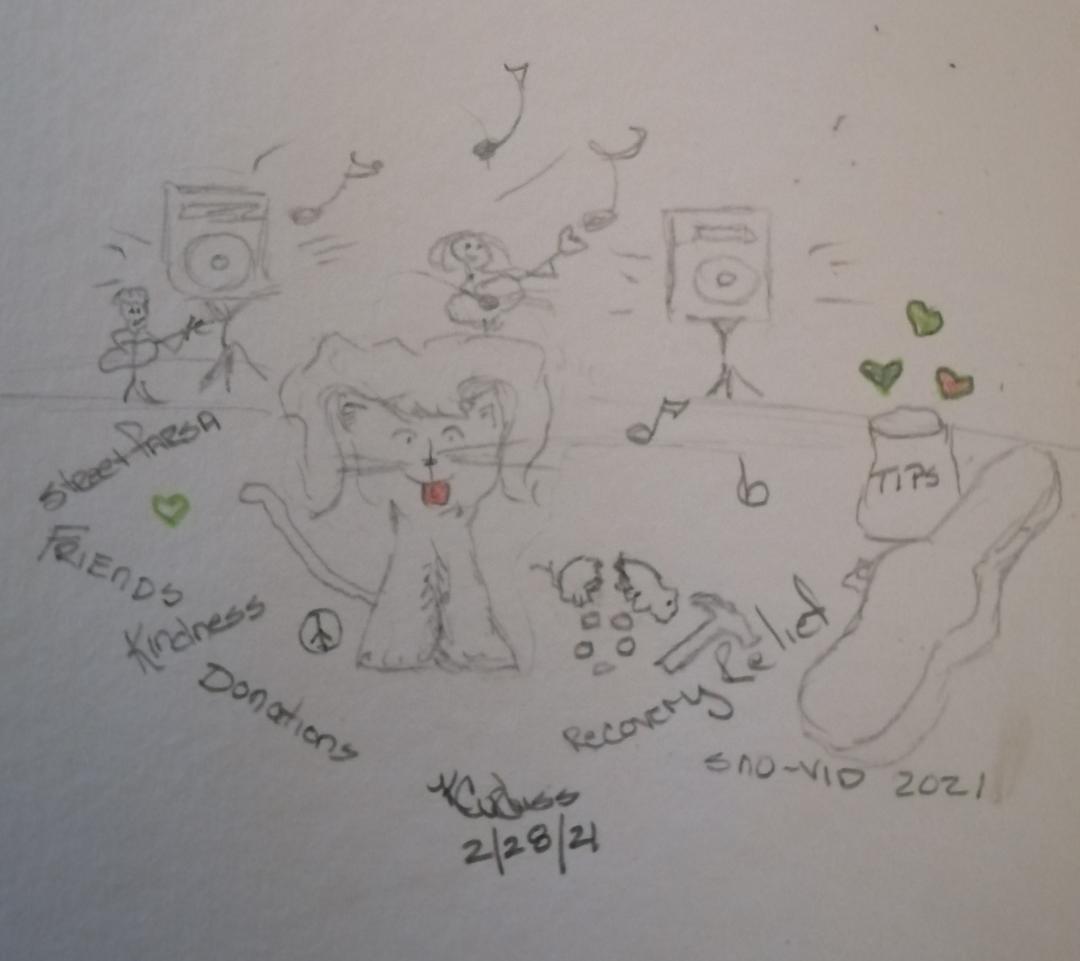 It was the week of February 15th 2021.
It began snowing late Sunday night, we forgot to drip the faucets, the one thing we could have done but didn’t in preparation for a predicted snow storm in San Antonio. The weather predictions are undependable, but in this case, they were spot on.
Around 1am on 2/15, with snow blanketing the neighborhood, I woke Sofia up and we went outside and played. Certainly, it would be gone with the morning sun, mistake number 2 on my part.
Our pipes were frozen at 1am, nothing to do, but wait until the light of day to try and fix the problem.

What followed was a week of survival skills, no heat, no water, 2 broken pipes, roads closed, everything closed.
Damage to souls and structures.
I decided to donate my tips from a gig on 2/27 at StreetfareSA to help local relief efforts. We raised $250 in person and via Paypal donations. You can still donate at paypal.me/katrinacurtissmusic.

In life we do what we can, whenever we can ~ Namaste

The following is a conversation I had with my cat, concerning money raised.

I was so surprised when I got home from my gig,
Basura Cat was wearing a wig.
She says she was having a show all her own,
It’s what she does, when she’s all alone.

I told her my gig was lots fun,
That it was great to see everyone.
She put her nose up in the air,
As I unloaded, pretending not to care.

But when she saw that cash on the table,
To pretend to not care, she no longer was able.
“Money!” she cried, “A fifty, some twenties and more!”
She can only count to 10, not one dollar more.

The audience donated to help local relief,
So far, we’ve raised $200, which is beyond my belief.
The kindnesses of others, to those they don’t know,
Like the Grinch, my heart grows and grows.

Basura then got her pennies and chipped them in,
She raised her paws to the ceiling, “Let the Healing begin!”
So thank you to those who give and who gave,
You’re my heroes ~ strong, beautiful and brave.